In earlier times, the headman of the village…

In earlier times, the headman of the village, together with people in his ‘nad ’, consulted with the astrologer, the auspicious day for the celebration of Kailpodh (the festival of arms). Today, it is celebrated, in the first week of September, mostly on September 3. It is similar to the Ayudha Puja (Worship of arms) that is celebrated in South India.

By the end of August, farmers have transplanted their paddy, and the first ears of paddy appear on the stalks in the fields. It is time to celebrate and prepare for the next season. Agricultural tools, are cleaned and put away, and weapons are brought out in preparation for the hunting season. On the morning of Kailpodh , family guns and other weapons like odikathis, pice kattis , are brought to a central room, cleaned and oiled. At the auspicious time given by the astrologer, incense is burned, and sandalwood paste is placed as a dot on each piece. A ‘tok puv’ (flower) is placed in the muzzle of each gun and ritual offering of the food cooked for the afternoon meal (usually kadambuttu, steamed broken rice cakes and pork curry with liquor) is placed on a banana leaf and placed near the weapons. Then it is time for the grand feast.

The men then go to the village mand (green) to take part in ‘coconut shooting’. The village head usually fires the first shot at the coconut tied high up on a tree. Earlier, this was a men’s preserve, today women also join in and many Coorg women are good shots. This practice of ‘coconut shooting’ is also a sport, at the Kodava Samaj meetings in most cities, allowing city dwellers to practice their shooting skills ! In the old days, there were running competitions, stone throwing, akin to shot put, and the cutting of banana stumps planted in a row, to test the efficiency of newly cleaned knives. 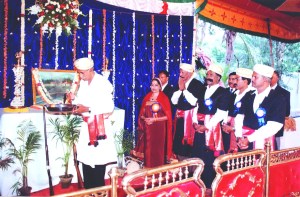 After the festival, at the time fixed by the astrologer, the village youth set out on a hunt. There are rules for dividing the game that is shot. The man who shoots an animal first, even if he doesn’t kill the animal, is given the head, thigh and shoulder meat – in addition to a share from the general pool. The person who touches the wounded animal first is also given some shoulder meat. Dogs taken on the hunt get their share too, even though it is given to the master, though bitches have no share!

Coorg festivals are celebrations of thanksgiving. As the compiler of ‘Pattole Palame’ folklore book mentions, Kailpodh is a ‘Muhurta’ for the paddy bearing stalk (Kail).