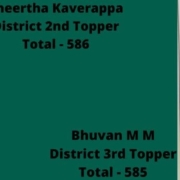 It is a matter of pride for the Kodava community that a pre university college set up by the Kodava Education Society has not only achieved 100 per cent results, but bagged the second and third ranks in Kodagu district in Karnataka.

The Coorg Institute of Pre University College (CIPUC) was set up at Halligattu near Ponnampet in 2017 on a sprawling green campus. There are two branches viz. PCMB and PCMC with 60 intakes each.

Dr Rohini Thimmaiah is the principal and she heads a team of well accomplished teaching faculty.  Students are given personal attention and guidance by the teaching staff.  Parents are kept informed of their children’s progress in academics as well as in other extra-curricular and co-curricular activities.

One of the important factors in CIPUC is the coaching given to the students in writing the Common Entrance Test (CET).  The coaching starts from the first year of PUC and it gets intensive in the second year.  CIPUC students invariably emerge with good ranking in CET.

So far four batches have graduated from CIPUC.  Results have been consistently good and there is improvement in the performance year on year.

Quite a few of the students graduating from PCMC stream join Coorg Institute of Technology (CIT) for a degree in engineering. The training they receive in CIPUC helps them cope very well in the engineering subjects.  Admission for 2022-2023 academic year is in progress. 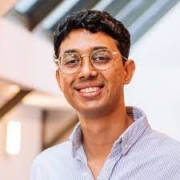 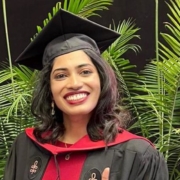 ‘Coorg Person of the Year’ Dr Sanjana Kattera (in picture) has completed her Masters in public health from the prestigious Harvard University in the United States.

Dr Sanjana, member of the Oxford Covid-19 vaccine trial team, had won the Coorg Person title in 2020, perhaps the youngest to win the title.

While pursuing her masters in Harvard University, she got an opportunity to work with the Children’s Foundation of Mississippi, where she was able to develop a policy memo addressing and proposing changes in legislation to improve the health outcomes in foster youth.

After graduation from Harvard, she has secured an internship to work on Type 1 diabetes with Pittsburg University and has been posted in Dhaka, Bangladesh to conduct the study.

Further, she has also been selected to take up a prestigious fellowship in the UK to pursue her passion in enhancing population health measures in children and adolescents with disabilities which she will start in September.

Dr. Sanjana, daughter of Dr. Suresh Kattera and Smitha Suresh, did her schooling in the United World College South East Asia (UWCSEA) in Singapore. She studied medicine at the University of Edinburgh in the UK.