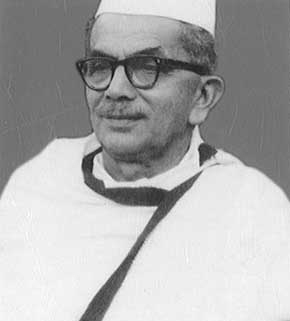 Though the Coorgs (Kodavas) benefited from the British rule, the nationalist movement sweeping India, did not spare Coorg (Kodagu). The freedom movement threw up several leaders from Coorg. Many common people, including students, courted arrests in large numbers to protest against the British rule.  During the ‘Quit India’ movement alone, 150 people were arrested in Coorg and 80 persons were imprisoned.

Among those who were in the lead during the early years of the freedom struggle, were Congressmen – Pandianda I. Belliappa (in picture) and Paruvangada Kushalappa. The latter had an untimely death in 1928 at Madras while he was returning from the Calcutta Congress session.

The first batch of freedom fighters to be arrested in Coorg in 1930 were Pandianda Belliappa, Kollimada Karumbayya (who later became a Rajya Sabha MP in 1954-55), Janab Abdul Ghafur Khan, of Bilugunda, and H.R. Krishnayya, of Besagur.

The Kodagu Weekly, started by the Coorg Company in 1920, was instrumental in spreading the nationalistic awareness among the people. The stalwarts of the freedom struggle, including Pandianda Belliappa and C.M. Poonacha were part of the editorial team of the Weekly which featured mainly political issues.

In 1929, Congress volunteers picketed liquor shops and other business establishments selling foreign goods at Virajpet and Madikeri. In a daring act, Mallengada Chengappa, B.G. Ganapaiah and Mandepanda Cariappa removed the Union Jack, and hoisted the Indian National flag at the Madikeri Fort in December, 1930.

Around the same period, C.M. Poonacha was involved in the composing, cyclostyling and distribution of a publication named ‘Veerabharati’ from Gonikoppal.  The police finally managed to track the cyclostyling machine. Poonacha was sentenced to nine months rigorous imprisonment at Kannur jail.

Students of the Madikeri Central High School too participated in a strike, leading to the closure of the school for 10 days. The students arrested on the occasion included S.R. Narayana Rao (literary figure Bharati Suta), C.B. Monnaiah and Poojari Ramappa. The students were rusticated from the school.

Harikatha Vidwan Belur Keshavadas was externed from Kodagu for staging Harikatha programmes to infuse patriotic feelings among the people.

Many affluent planters who were used to dressing in Western attire and consuming foreign liquor, started wearing traditional Indian dresses and also gave up alcohol.

In 1930, the sale of liquor was affected due to the picketing of liquor shops under the leadership of Koravanda Ponnappa. Many women, led by Kotera Accavva picketed liquor shops.

During the annual Keil Poldu festival, the sale of liquor came down from 800 gallons to 200 gallons at Virajpet and from 300 gallons to 36 gallons at Gonikoppal. Consequently, several excise contractors were not able to pay the bid amount and had to give up their contracts. According to a report, the sale of arrack which was 2,742 gallons in Coorg in 1929, dropped to 229 gallons in 1930.

Mahatma Gandhi toured Coorg in February, 1934, to propagate the eradication of untouchability. The Mahatma visited the Harijan colony at Kaikeri in South Coorg. He stayed at the Ramakrishna Ashrama at Ponnampet. Gandhiji who entered Coorg from Thithimathi, visited Gonikoppal, Hudikeri, Virajpet, Ammathi, Siddapur and Suntikoppa prior to addressing a large public meeting at the ground near the Raja’s Seat in Madikeri.

The freedom struggle peaked in Coorg during the Quit India movement. Pandianda Belliappa, Kotera Karumbaiah, Chekkera Monnaiah, and Kollimada Karumbaiah were arrested in August, 1942. C.M. Poonacha was arrested while returning from the Bombay session of the Congress. Subsequently, Biddanda Cariappa, Korana Devaiah, Mandepanda Somaiah were arrested. They were taken to the Vellore Jail in Madras State. Students too were in the forefront of the movement. These included Ajjikuttira Appanna, Paruvangada Uttanna, B.D. Subbaiah, Maneypanda Chinnappa, and Singura Kuttappa. Around 90 students of the Virajpet High School were expelled from the school hostel.

The office of the Kodagu Weekly was sealed and its Sub-Editor B.D. Ganapathy was arrested.

The events which marked the freedom struggle in Coorg go to prove that the people of Coorg did not lag behind in nationalist fervour and sacrifice.

Source: Rise and Fall of the Coorg State by P.T. Bopanna. Rolling Stone Publications (2009). The ebook is available on Google Play store.

AUTONOMOUS KODAGU COUNCIL IS THE ANSWER
Scroll to top