The Kodavas living in Kodagu district of Karnataka…

The Kodavas (Coorgs) living in Kodagu (Coorg) district of Karnataka are the only community in India who are exempted from obtaining arms licences.

The special privilege to own firearms without license was granted to the Coorgs by the British in recognition of their martial traditions. This was continued after independence by a notification issued by the Union government in 1963 which exempted “every person of (the) Coorg race and every jamma land tenure holder in Coorg” from the Indian Arms Act. There was no curb on the privilege even after Coorg, which was a separate state earlier, merged with Karnataka following the reorganisation of the states in 1956.

However, the exempted people have to obtain an exemption certificate from the district administration.

While granting exemption to the Kodavas in February 1861, the then Chief Commissioner of Coorg, Mark Cubbon, said in the notification: “In consideration of the exalted honour, loyalty and intrepidity, characteristic of this little nation of warriors and in recollection of its conspicuous services in aid of the British government, it is my pleasing duty to notify hereby, for general information, in virtue of the power vested in me by the government of India, that provisions of the Arms Act, commonly called the Disarming Act, are not applicable to the gallant people of Coorg.”

The customs and traditions of the Kodavas are inseparably linked to arms. The birth of a son is announced to the world by firing a single gunshot in the air and a death in the family is made known by firing two shots in the air in rapid succession. People in the mountainous Kodagu district live in isolated homesteads surrounded by coffee estates and the only way to inform the neighbours is to fire gun shots.

A proposal to do away with the privilege under the Arms Act was made way back in 1964 by the Central government. But the move was dropped, apparently at the behest of Field Marshal K M Cariappa. The then Coorg Deputy Commissioner, Mr. T P Issar, in his report, had said : “It is a well-known fact that the gun, the odikathi (a small broad bladed sword) and the peechekathi (a type of dagger) are as much a part of the life of a Coorg as the kirpan is for the Sikhs and the kukri for the Gurkhas. From my study of the old gazetteers and other books on the life and culture of Coorg and from my knowledge of their present day customs, I am in a position to bear out the truth of the arguments of the Coorgs that these arms are inseparably linked with many of their ceremonial occasions.”

“These examples have been given here to impress the point that withdrawal of the exemption will amount to creating difficulties in the observance of many of their rites and customs.”

“It will be very pertinent to state here that in spite of the freedom enjoyed by the people of Coorg in the possession and use of arms, their behaviour as citizens has been generally exemplary”.

According to a government estimate, there are 19,641 firearms in the district, consisting of 14,534 under the exemption category and 5,107 under the licenced category.

The Karnataka government informed the Centre that there has been no misuse of the privilege. However, the state government pointed out that two arms dealers in Kodagu had allegedly indulged in gun-running, and the matter is under investigation by the Corps of Detectives. 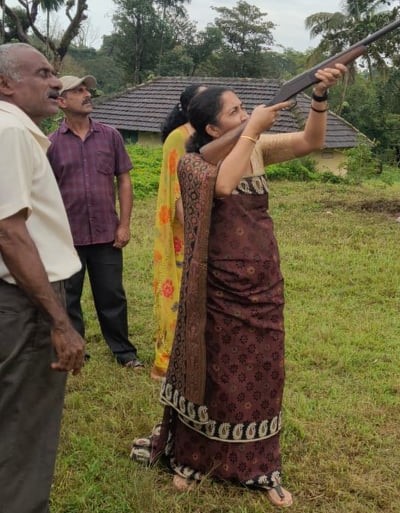 A petition filed in the Karnataka High Court in 2015, which was revived subsequently in 2018, was filed by one Capt Chethan Y.K., who argued that the arms exemption amounted to discrimination on the basis of caste.

The matter came up before a Division Bench comprising Chief Justice Abhay Shreeniwas Oka and Justice Mohammad Nawaz. During the hearing, the Union government represented by the assistant solicitor general of India C. Shashikantha stated that the exemption granted since 1963 to certain class of people in Kodagu from obtaining a licence to possess and carry firearms under the provisions of the Arms Act, 1959, was being reviewed along with the review of the entire Arms Act.

The assistant solicitor general of India informed the Bench that the home ministry had constituted a committee to review and suggest amendments to the Arms Act, and the process to secure the views of stakeholders had been initiated.

Through a gazette notification in October, 2019, The Union home ministry extended the special provision that exempts the community from getting a gun licence till October 31, 2029. This applies to any person who is ‘Coorg by race’ and all Jamma land holders in Kodagu.

The notification stated: “The arms or ammunition carried or possessed by any person being Coorg by race and every Jamma tenure holder in Coorg and herein exempted whilst residing or travelling outside the district of Coorg shall not exceed one rifle with 100 rounds of ammunition for the same and one smooth bore breech or muzzle loading gun with 500 cartridges or the equivalent in leaden shot and gunpowder.”

By continuing the exemption given to Kodavas (Coorgs) in Karnataka, the Union government has recognised the centrality of arms worship in the religious and cultural practices of the Kodavas.

Though the privilege has been enjoyed by the Coorgs for more than 150 years since the times of the British, what prompted the Union government to continue the privilege was the fact that guns were seldom misused by the community in crimes or anti-national activities.

It is a well-known fact that Kodagu is a nursery of the Indian Army and the district has contributed a sizable number to the defence services.