Woman delivers a male child, a gun is fired in the air…

As soon as a Kodava woman delivers a male child, a gun is fired in the air to announce his birth. A bow and arrow made from the stalk of a leaf of the castor plant is placed in the baby’s hands (symbolic of the martial traditions of the Kodavas). If the child is a female, a bell-metal plate is struck to announce her birth.

The baby is then given a bath and the lady of the house puts a drop of a mixture made with jaggery, ghee and pepper powder into its mouth, saying aloud “Dissolve like jaggery, melt like ghee, and be cool like pepper”.

The baby is named on the twelfth day when it is placed in a cradle for the first time.

A wick lamp is lit and placed on a mukkali (low three-legged wooden stool). The blade of a knife smeared with castor oil is held over the flame of the lamp to catch the soot. This soot is applied to the lower eye-lids of both the mother and the child.

Thereafter, three married ladies, each in turn, take the stone roller of a traditional grinding stone and roll it alternately first in the empty cradle and then on the ground, thrice. As they do so they say aloud “May you live as long as a stone”. Then the child is placed in the cradle for the first time and rocked. While being rocked, the child is called by the chosen name (e.g., Ayyanna) in the following manner: “Ayyanna, Ayyanna, get up to eat rice mixed with milk”.

The child is then fed a little cream using a gold coin as a spoon. The assembled guests and relatives, mainly women, then rock the cradle one by one, and call the child by its newly-given name and give gifts. Lunch is then served. 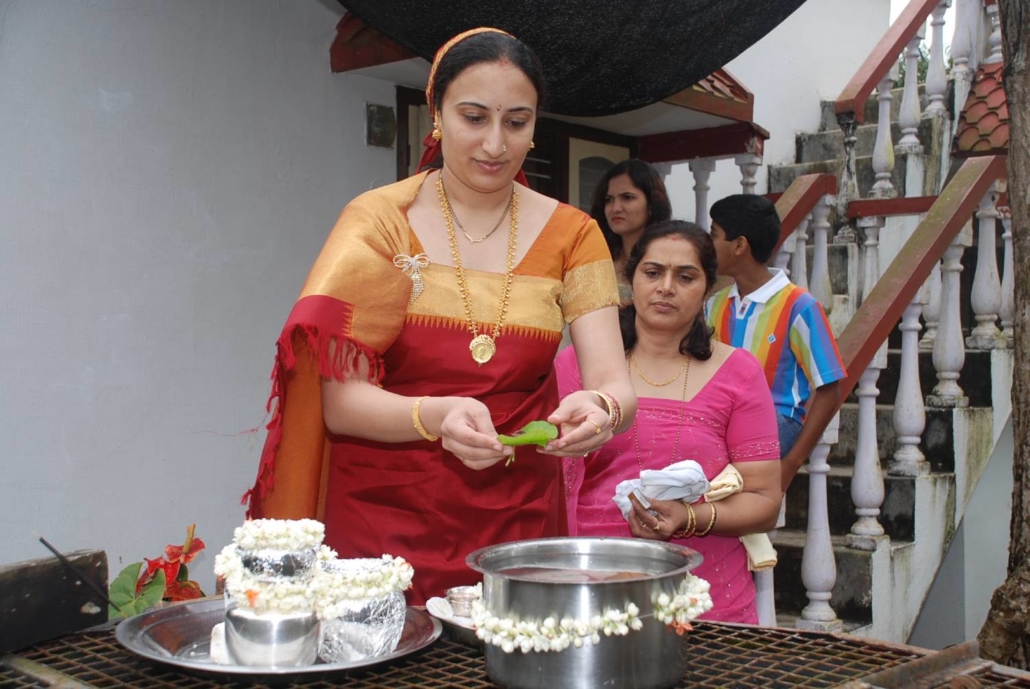 This is the ceremony that marks the end of the period of confinement for the mother. On the sixty-first day after the birth of her child, the mother has her daily bath and dresses up wearing all her jewellery for the first time after her confinement.

The mother then goes to the well with other members of her family to perform the Ganga puje. She places three torale (a wild creeper) leaves side by side on the wall of the well, with their stalks pointing to the West, and puts a few grains of rice on each leaf. She sprinkles some grains of rice into the well thrice and prays. She is then given three betel leaves and three areca nuts. She places the nuts on the leaves and gently drops them into the well, trying to ensure that the leaves do not turn over as they fall. Then she draws water from the well and drinks three handfuls.

She pours the water that she has drawn into two small pots, places them one over the other on her head and carries them into the house. As she walks to the house she is accompanied by two unmarried girls, one in front and one behind her, each carrying a pot of the freshly drawn water on her head. They place the pots of water in the kitchen and then go to the central hall. Meanwhile, the child is placed on a mat in the central hall with its head towards the East. The mother sprinkles some rice on the sacred lamp that is lit in the hall and prays with folded hands. She then touches the feet of all the assembled elders and seeks their blessings. This is followed by a feast.

After this ceremony, the mother and child may visit a temple. Nowadays it is common to celebrate both the naming ceremony and the Ganga puje on the sixty-first day after the child is born.