An important part of the tangible heritage of the native communities of Kodagu is their architectural heritage—their ainmanes or ancestral homes. Each ainmane belongs to an okka (an exogamous patrilineal clan whose members claim descent from a common ancestor) which is identified by its distinctive mane peda (house or okka name). The mane peda identifies both the members of an okka and their ainmane.

The traditions, customs, festivals and rituals that are associated with the ainmanes are some of the intangible aspects of their unique culture and are an inalienable part of their heritage.

The ainmanes of many okkas are no longer there: some are in a state of disrepair or are in a dilapidated condition; and a few have been rebuilt as simple houses. The traditional ainmanes that are still standing today account for only about forty per cent of the ainmanes that were built in Kodagu.

A ‘traditional’ ainmane is characterised by a kayyale (verandah) in front with carved, square, tapered, wooden pillars, aimaras (wooden bench-seats) between the pillars, ornately carved wooden windows and door frames, and specific areas within the ainmane for the performance of rituals. A ‘functional’ one is where all the members of the okka gather to celebrate important festivals, ceremonies and rituals such as Karanang Kodpa (ritual offerings to ancestors), or Puthari (harvest festival).

It is estimated that currently there are about 1500 (1750) okkas in Kodagu and the total number of traditional ainmanes that are still standing and are functional (as defined above) is around 680. Kodavas, the largest among the native communities of Kodagu, with nearly 900 (1050) okkas account for around 430 of these ainmanes. (The figures within brackets include branches within an okka that have separate ainmanes.)

In about eighty per cent of the okkas, the total number of members in the okka ranges from about 15 to 150. A few okkas have many more members. While in the past all the members of an okka lived together in their ainmane under one roof, that is no longer so. Currently the number of members of an okka who live in their ainmane ranges from none to fifteen, except in a few cases.

In a few okkas a split in the okka has resulted in the total separation of the bhagas (branches) within the okka, with the breakaway bhagas building their own ainmanes on their portion of the jamma (ancestral) land or on land bought in a new location. Such an okka therefore has more than one ainmane, each belonging to a bhaga of the okka. One of these ainmanes, invariably the original or the oldest among them, is considered the primary ainmane or arvad of the okka (where all the bhagas meet at least once a year for Karanang Kodpa or Puthari). A breakaway bhaga sometimes has an ainmane built in the traditional style, conducts all the important ceremonies in its own ainmane and does not join the other bhagas in their arvad. However, it may be noted that in nearly all these cases, all the bhagas within the okka continue to use the original thutengala (cremation ground) or kekola (burial ground) of the okka.

Overall, there is a broad similarity in the physical features of the ainmanes all over Kodagu, and in the traditions, customs and rituals followed in them.

The content for this page was contributed by Boverianda Nanjamma and Chinnappa, authors of the book – Ainemanes of Kodagu. 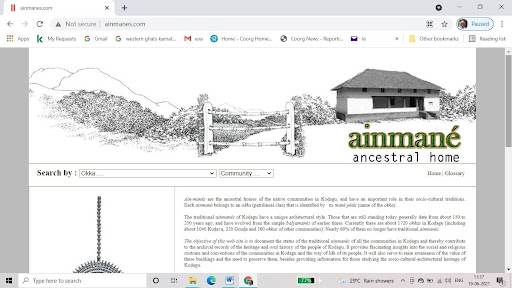