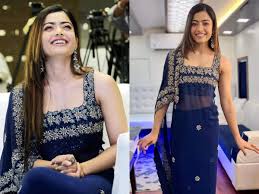 The Kodava community (Coorgs) in Karnataka was once known for its progressive and cosmopolitan outlook. But things have changed. Nowadays, a section of the women in the community observe everything through ‘saffron tinted’ glasses.

These women are upset with actress Rashmika Mandanna of ‘Pushpa – The Rise’ fame for wearing sleeveless blouse while wearing a Kodava or Coorg style sari recently.

When I posted Rashmika’s photo in Kodava sari on Facebook, some of these matronly ladies left comments (hidden!) disapproving Rashmika showing her bare arms.

These ladies forget the fact that fashion is a form of self-expression at a particular period and place and in a specific context.

I wish to bring it to the notice of these ladies, that in the past, a Coorg widow wore only white in the case of the sari, blouse and vastra (head dress). This is not strictly adhered nowadays which is an indication of the progressive thinking in the Coorg society.

For their information, sleeveless or half-sleeved blouses are of recent phenomenon. In the olden days, Kodava women wore Kala Kupya with long sleeves and closed up to the neck.

Gradually, the short sleeved, round-necked choli replaced the traditional jacket. There was a considerable amount of change in this garment after the British annexed Coorg in 1834. There were variations in the styling of the neck. The jacket saw the introduction of the high neck and the band collar. The placket was also first seen with the jacket having an opening in the front. The sleeve also became stylish and fitted with an opening at the end with a sleeve placket.

The jacket initially was a shapeless garment only serving the purpose of an upper garment. Following the influence of the British, the stitching patterns changed. What was initially a garment without darts, had darts in front and at the back. Then came the princess seam and also the patch pocket to serve the utilitarian purpose.

The fabrics changed from cotton to silk to experimental fabrics such as satin and velvet which were more often than not imported. The trims also became more fanciful and instead of the usual press buttons, pearl and shell buttons were used.

For more on Kodava sari, follow the link below: